The world of psychedelic art has been around for as long as people have been getting high and picking up paintbrushes. Many believe it reached it's popular peak in the late 60's when the hippy movement and flower power was all the go. I guess that is a fair argument. That's not to say that psychedelic and visionary art isn't popular anymore. Far from it - there are thousands of psychedelic and visionary artists around the globe who are creating amazing images using a whole range of interesting techniques.

Here I would like to present what I believe are some  of the leading psychedelic and visionary artists working in the field today. Some of these artists are so technically brilliant in their usage of digital processes that it makes my mind boggle as to how they do it. A number of these names will be instantly familiar to some of you such as artists Alex Grey and Martina Hoffmann while others might be lesser well known so take the time to follow up on them and visit their websites for some amazing visions of the inner mind.

This list is in no particular order and I'll add more details about other artists listed soon so check back again sometime. 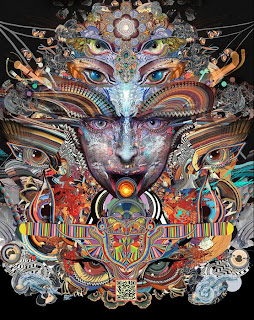 Currently one of the leading digital psychedelic visionary artists in the world today. Andrew works in the field of visual concept art, creating images for film, fashion and gaming. More recently he has been working on designs for music festivals and bands. His artwork has been featured on album covers of several electronic and psybient music artists such as Bluetech, Beats Antique, Sporeganic, and Phutureprimitive. 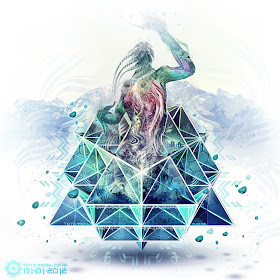 Justin is a highly skilled digital artist who creates stunning fantasy visionary hybrids. He is also very active in creating vector art, logo designs, promo material and user interfaces. His work has a leading edge look to it that combines patterns and shapes from a digital world with the more organic feel of spiritual practices.

An artist who paints with a combination of metaphysical, spiritual, and music themes, Tokio Aoyama hails from a tiny town in the north of Japan. Tokio has painted murals and has done commission work for clients all over the world. He has designed art for record labels Epistrophik Peach Sound, Mello Music, Moamoo, and Jazzy Sport. Presently he is looking to share insight into Japanese culture, history, and tradition such as tattooing and art trends of present day Japan. 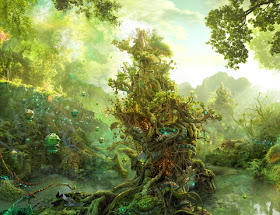 Andy Thomas' work creates a visual fusion between Nature and Technology. By taking photos of plants, insects and machines and compositing them with artificially created forms in various 3D programs. The very process of the art he creates is symbolic of mankind’s continuing corruption of the natural world. His photographic endeavours have led him to such exotic locations as Borneo, Laos and the rainforests of Tasmania and the Daintree River. 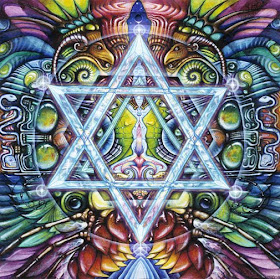 Carey creates wildly colorful psychedelic vision that include concepts of spirituality, molecular biology, environmentalism and global peace. In recent years he has worked on large scale sculptures and bio-constructions for music festivals and spiritual gatherings. 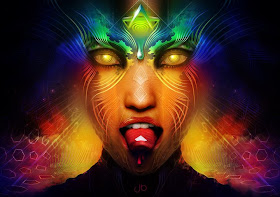 Justin is a new artist on the scene who is really pushing the envelope with what can be achieved using digital techniques. His understanding of color and composition is as good as I've ever seen. Truly remarkable work and he deserves more attention from the art world that's for sure. He is currently busy working full time to support his love of art so let's hope he can one day get enough fans to support his artwork full time.

Another huge young talent in the field of artistic psychedelic visions. George works primarily in the digital medium. After drawing concepts in his sketchbooks and dream-journals, he fully realizes those concepts using an electronic drawing pad and digital ink. He draws inspiration from a variety of related subjects, including meditation & Yoga, martial artistry, lucid dreaming, comparative mythology, culture jamming, and permaculture. Superb artist. 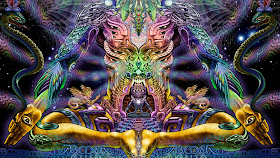 Luke is well known in the psychedelic community for being one of the first artist to create complex, vividly colorful psychedelic art that combines traditional and digital techniques. His art has been shown internationally with such visionary heavyweights such as Alex Grey, HR Giger, Robert Venosa and Ernst Fuchs. His art is highly sought after - so much so that his has had the misfortune of seeing a great deal of his art work, including digital files and full sculptures , stolen by thieves over the past few years ! 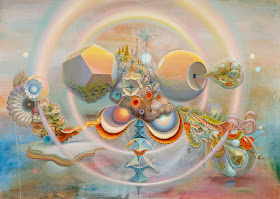 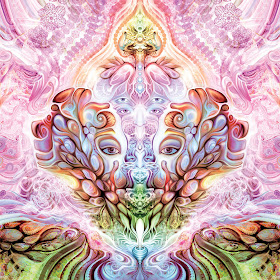 Fabian draws inspiration from nature, mainly from the architecture of insects and plants. He is deeply obsessed with the tiny micro patterns nature is capable of bringing everywhere; their intricate shapes reveal grids of sacred geometry, and it is there where he take his pencil and attempts to channel them. Although he is a highly skilled traditional artists I think it is his recent digital work with ZBrush and Painter where he really shines. 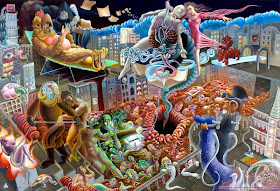 David began his art journey by making posters for punk band when he was 16 years old and then moved onto theater and party production, 3d animation work and film. These days he is focused on oil painting where he is able to express his varied interests in psychedelia and psychedelic culture on canvas in large full of spiraling visions that mix sexuality, religion, spirituality and death.

Amanda Sage's art is well known to psychedelic trance and psychill listeners here at the psyamb podcast because he were is often on display at international dance parties around the world. Born 1978 in Denver, Colorado; her adventurous spirit carried her to Bali, then on to Vienna, Austria to study classical painting with Michael Fuchs, resulting in becoming a long time painting assistant to Ernst Fuchs. 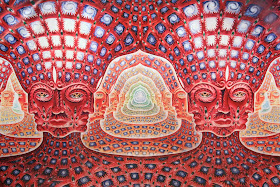 Ask anyone who their favorite psychedelic artist is and Alex Grey will no doubt be a very popular answer. Alex has an amazing ability to go beyond this world, into the world of the psychedelic experience, bring back what he see there and directly translate it onto canvas. Much like Salvador Dali, what sets Alex's work apart is not just his vivid imagination but also his technical ability. Every inch of his paintings are meticulously worked on as applies decades of training to create the ultimate visionary masterpieces.

Martina Hoffmann is a world renown psychedelic visionary artist with a long history in creating amazing surreal and dreamlike images that are inspired by her own inner journeys. Her technical skill increases year after year to a point now where here works are considered true masterpiece paintings. 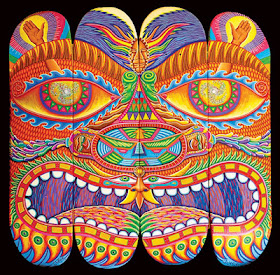 Chris is a young Canadian based Peruvian artist who has a created a instantly recognizable individual style of psychedelic art that appeals to a wide range of visionary art fans. His work has a graffiti street style art feel about it that could well be a result of his upbringing in Peru. His is very active in getting his work known around the world through his excellent website PositiveCreations where he has a shop that sells his original works, prints, clothing and more. 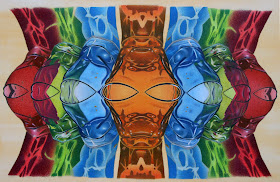 I first ran across Adam's work as a member of the DeviantArt collective where we both regularly posted our own psychedelic pencil artwork over the past 10 years or so. I was always and still am astounded by just how crisp Adam's colorful pencil drawings appeared to be and I would sometimes ask him for tips for which he was always more than helpful. Much like Chris above, Adam too has defined his own unique and distinctive style that has won many fans worldwide. 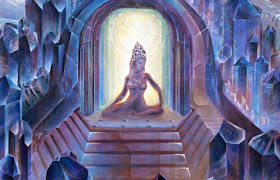 Daniel is an artist and author especially focused upon a revival of a sense of the sacred in the creative process and the natural world. His paintings have evolved over the years to a point now where he his work displays a real sense of confidence and sublime technique. I can see hints of Venossa, Dali and Fuchs in his work. For someone so young the sky is the limit.

Michael makes use of paint markers to create bright, detailed psychedelic art which he completes in front of live audiences at festivals and art shows around the world. He comes from a background in scientific illustration which you can definitely see influences of in his amazing work. He is also an accomplished musician. You can see and hear all about Michael's talents at his blog michaelgarfield.blogspot.com . 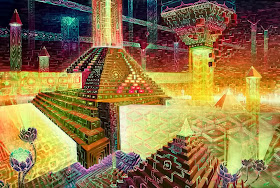 Jonathan Solter is an artist living and working in the Bay Area. He dedicates his time to art, life and love. Illustration, stage design, live painting and murals are his main artistic focuses. He loves the creative community in the Bay Area and is busy co-creating his dreams with other like-minded artists. His art has been created and shown internationally as well as across the West. You can view more of Johnathan stunning psychedelic art at a number of psytrance and music festivals were he does live paintings or view online at his website.

Cameron Gray is an award winning Australian visionary graphic artist and photographer. Cameron’s work is regularly displayed in live music venues across Australia, the Museum of Computer Art in Brooklyn, New York, and his body of work has been selected for preservation by the National Library of Australia as one of the countries artists of the 21st century. More of Cameron's trippy art backgrounds can be viewed online here at his Parable Visions website. 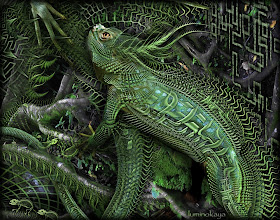 Russian artist Luminokaya creates extremely detailed and complex psychedelic digital art. Your eyes can get lost for hours poring over the details while your brain tries to process all the little details within. He is also an accomplished airbrush artist having produces a number of trippy blacklight posters for various festivals and events. 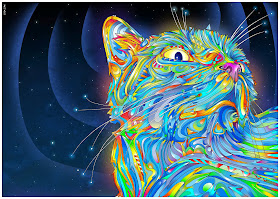 Matei Apostolescu (aka Beaucoupzero), is a freelance illustrator living in Romania. Even if you haven't heard the name before you have probably seen some of his unique psychedelic paintings. His trippy lion, cat and psychedelic skull paintings have spread all over the internet and social networks. He make use of all kinds of tools ranging from rotring pencils, markers, spray paint to Wacom tablet, Photoshop and Illustrator. 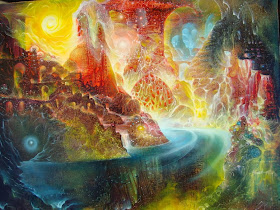 Josip Csoor is a Serbian visionary artist who has found a new fan base on the internet after struggling for many years with trying to get his art appreciated in his home country. His art speaks the language of the cosmos and is filled with the light of creation. Having mastered just about every form of painting technique he now passes on his knowledge of 30 years of painting to younger generations.